Some photos of my 1296MHz EME (Earth-Moon-Earth) system

Over the last 6 months I have been building up my 1296MHz equipment. My plans have changed somewhat from my initial ideas, not only as equipment and funds have become available but also as my knowledge and understanding of the requirements of this particular band has grown.
You can see a block diagram of my equipment for 1296MHz, as it currently stands.

The use of separate transmit and receive coaxial lines is to allow extra gain blocks and filtering to be added as required, and also to ease the relay isolation requirements. The first RX preamp will be mounted at the feed (to minimise system noise figure). The directional coupler is used to pick off some signal to send to a Fun Cube Dongle SDR, to allow processing of the full 90KHz segment of the 23cm band, whist the main line signal is demodulated by the conventional receiver in the TS2000X radio.
The rest of this page details the construction of some of the components needed to realise the EME system. 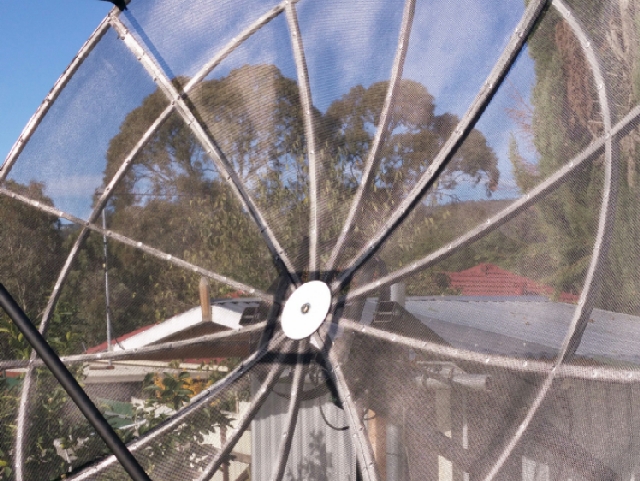 I started out with a home-made 1.8m diameter dish, covered with aluminium fly screen. Since then I have been able to obtain a second-hand TVRO dish (2.3m diameter).
It's a little weather beaten, but still quite serviceable.
On the right you can see a test of the automatic tracking mechanics. Note the shadow of the feed cage should be cast on the exact centre of the dish (it is tracking the sun). Some time and effort was put into making sure there was no sag or warp in either the reflective surface of the parabola, or the feed struts.
This effort is critical in ensuring that the antenna achieves (or at least approached) the expected level of performance.

Another critical point is aligning the feed directly at the focal point of the dish. 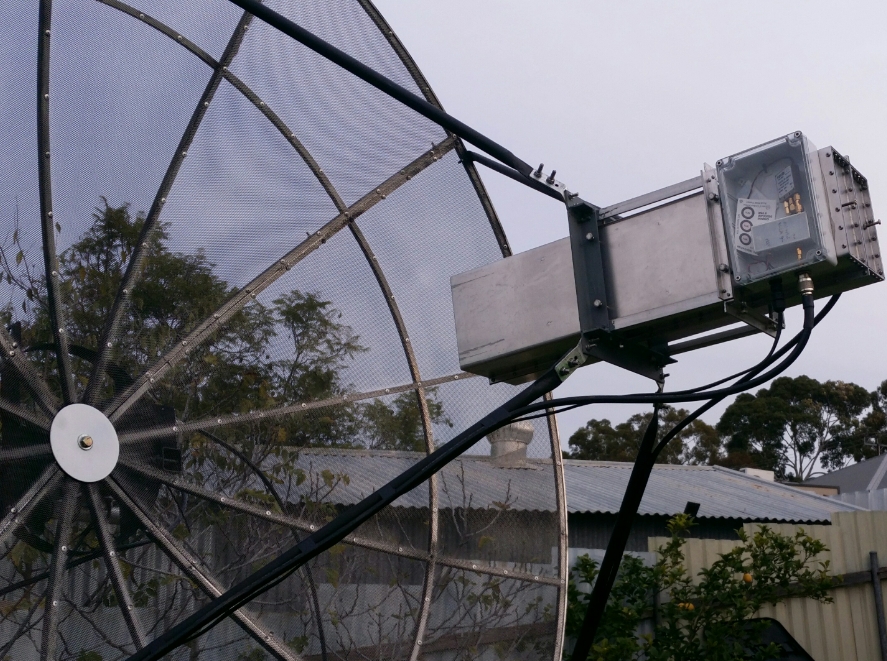 On the left you can see how the feed is attached to the dish struts in such a way as to permit precise alignment of the feed phase centre to the dish focal point.Note the LNA in a sealed box, mounted as close as possible to the RX antenna probe

I encourage anyone who is contemplating a parabolic reflector antenna to have a look at the excellent work done by Paul Wade, W1GHZ. His on-line antenna book (Useful Links) proved to be an invaluable resource for me.
I would also say that building your own parabolic reflector is not for the faint-hearted, as accuracy requirements are quite onerous, if you wish to make a good job of it. 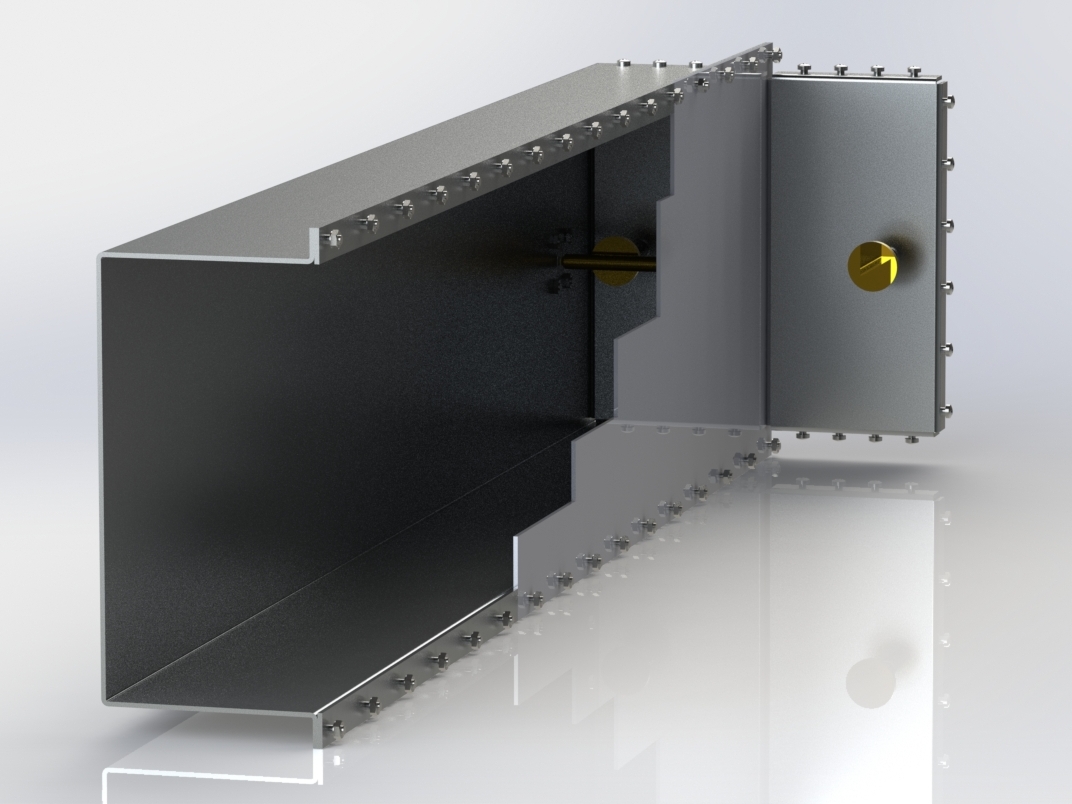 I decided to initially build the OK1DFC septum feed Useful Links, as it would be the easiest, quickest and cheapest for me to build. All parts are made from 1.6mm thick scrap aluminium sheet.
The CAD view on the right shows how the feed is put together. The probe feed and tuning slug can also just be seen.
Also note that my version of this feed is slightly different in the way the backing plate attaches to the waveguide and the septum.


Needless to say, attention to detail and careful measurements are not optonal for a project of this nature. Shown below is the finished feed, as well as some measurements of the feed at 1296MHz.

The view looking into the feed 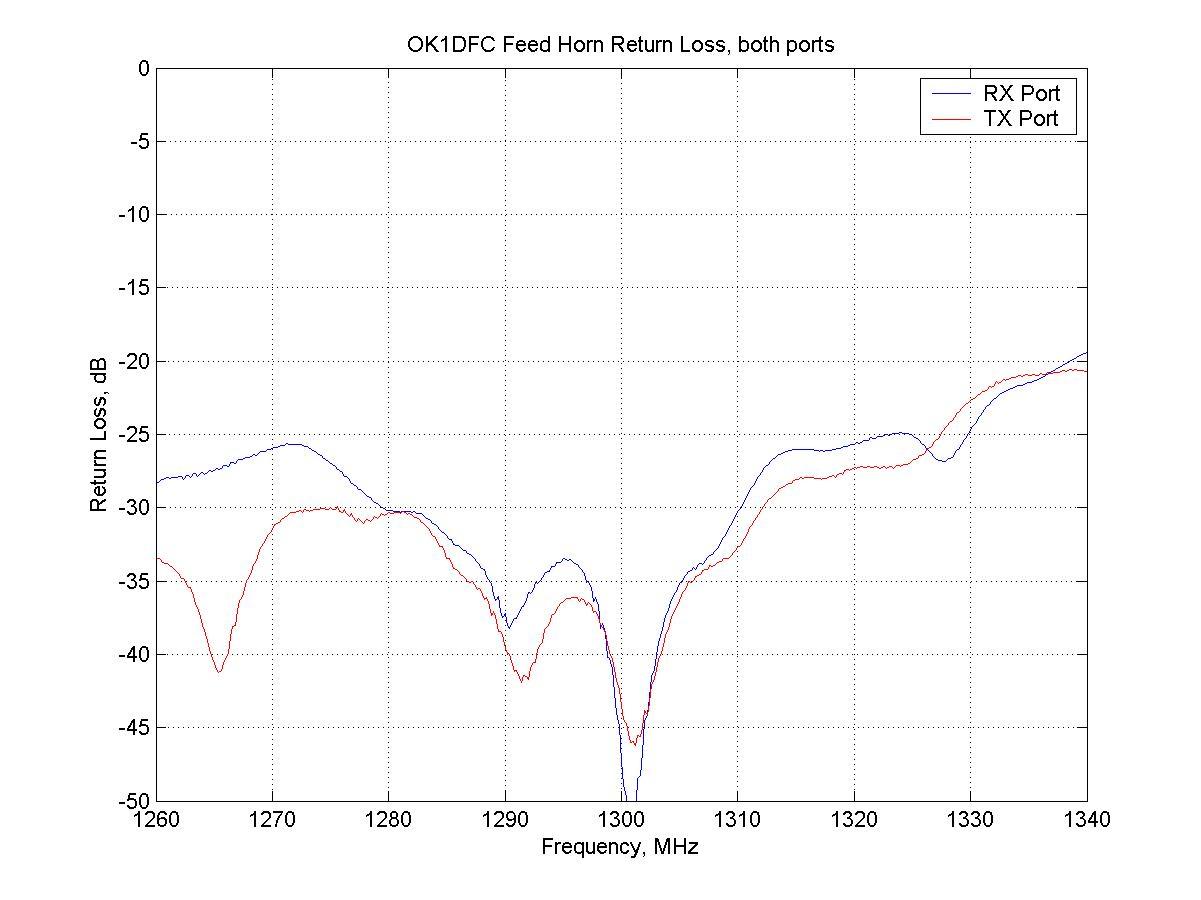 Measured Return Loss of both ports 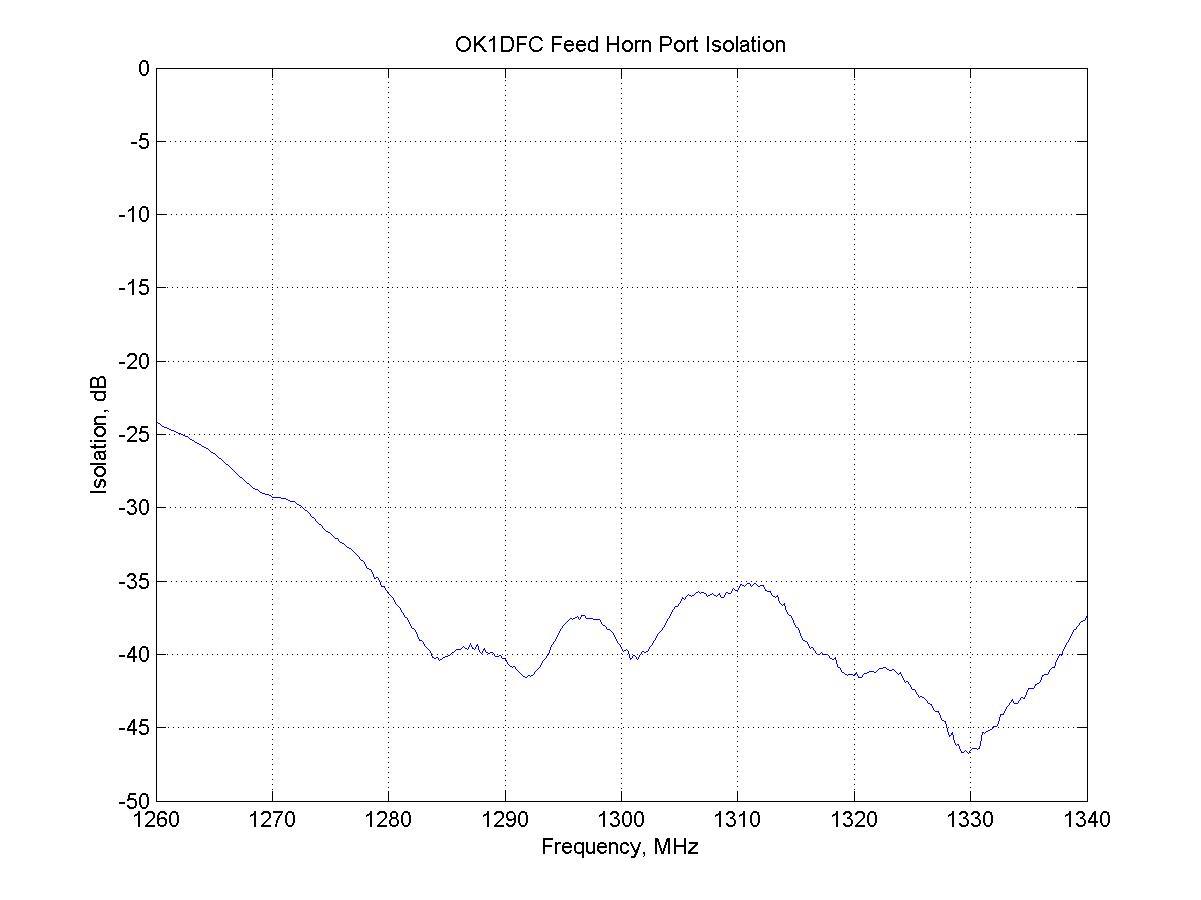 The best way to measure receive performance is to define an overall "figure of merit" for the system. In that way, any improvements made can be easily compared to a baseline. The Gain over Temperature (G/T) is such a measurement. It is a relatively easy measurement to make provided some obvious caveats are observed. The SETI League has an excellent website which details the procedure (Useful Links).
It starts with a simple sun noise vs cold sky measurement (usually called Sun-Y, in the literature). This Y figure, together with the interpolated quiet sun flux measurement of the day (Useful Links) is used to compute an overall G/T measurement. This represents an overall system performance metric. It is possible to delve further into system performance. By measuring (or calculating) antenna gain, receiver noise figure, LNA noise figure it is possible to estimate System temperature, dish spillover, or dish efficiency.

My initial measurements are summarised below. They are made using the excellent Linrad software running from the TS2000 radio's Intermediate Frequency through a Funcube Dongle SDR. Some effort has been made to verify the measurement system is linear so that the calculations are therefore valid.

Given a dish diameter of 2.3m and an estimated feed efficiency of η=0.6, I calculate a gain of 28.3dBi. This yields an overall system temperature Te of 107K. This is in the ballpark, but not yet optimised. Clearly there are some improvements to be made in my system.

The first step to improve performance will be to try adding a kumar choke to the feed, so as to improve dish illumination and minimise spillover. 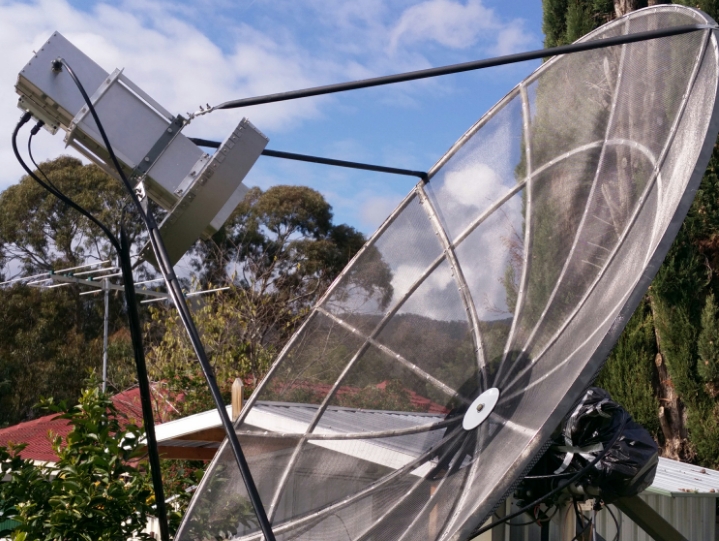 Made from some scrap aluminium, as per Paul Wade's W1GHZ dimensions

3-D EM simulation of the E-field around the feed 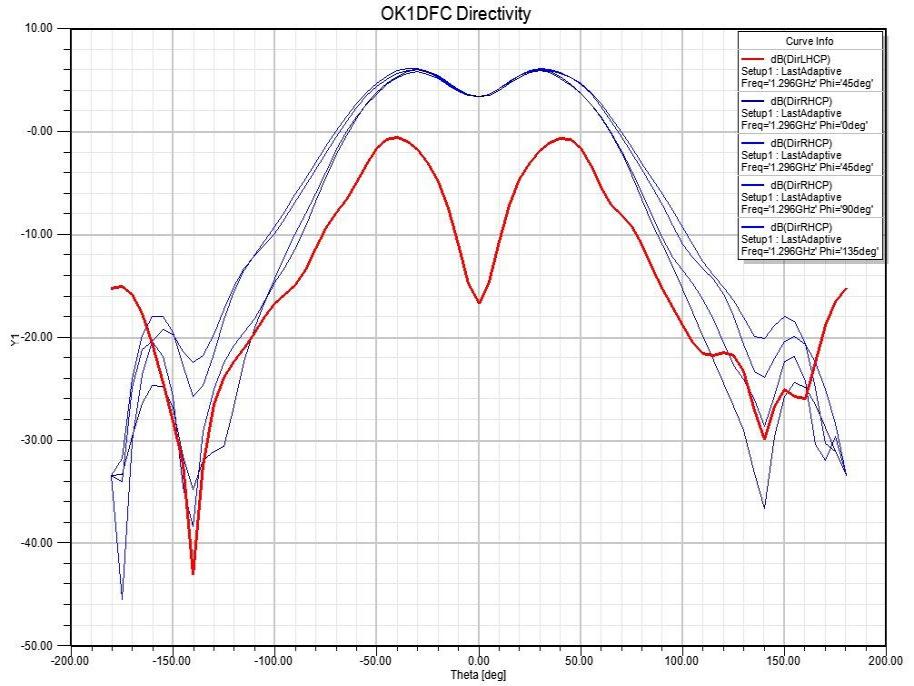 Radiation pattern of the feed. See text for further discussion

The directivity plot above shows RHCP patterns for 4 principle cuts (Φ 0°,45°,90° and 135°) in blue. The bold red plot shows the opposite polarization LHCP, for Φ45°. Ideally this should be very small, but due to the nature of the feed, it is significant. There is some debate as to whether adding a choke to such a small dish ultimately defeats the purpose: an improvement in spillover comes at the cost of increased dish blockage. The easiest way to confirm this is to build one and measure the improvement (if any) in G/T.

From the above, the average G/T measurement is around 9.1dB/K, which corresponds to a Te of 91K.
So adding the choke has reduced my system Temperature by around 15K.

Further improvements in the feed must focus on reducing the cross polarisation ratio, which is significant in this type of feed.
This is due to the fact that the square septum feed is.... well, square. The lack of rotational symmetry in the Φ axis will always be a limiting factor on both the circularity and polarisation ratio of the feed.
A circular feed should improve matters, and a design by SM6FHZ (Useful Links) promises just that.
I am still in the process of building this feed, but the results of my simulation look promising: 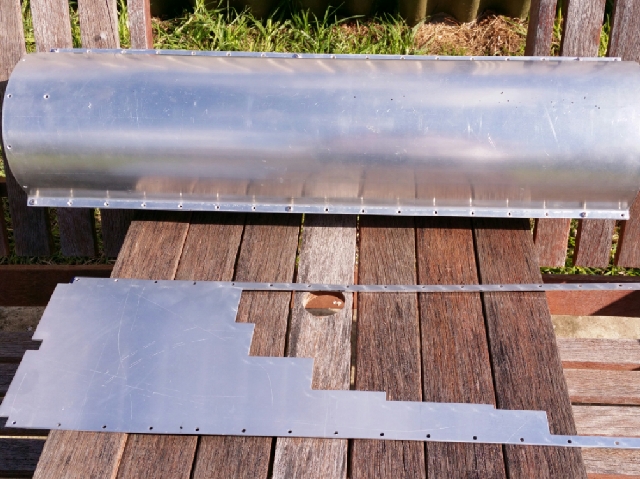 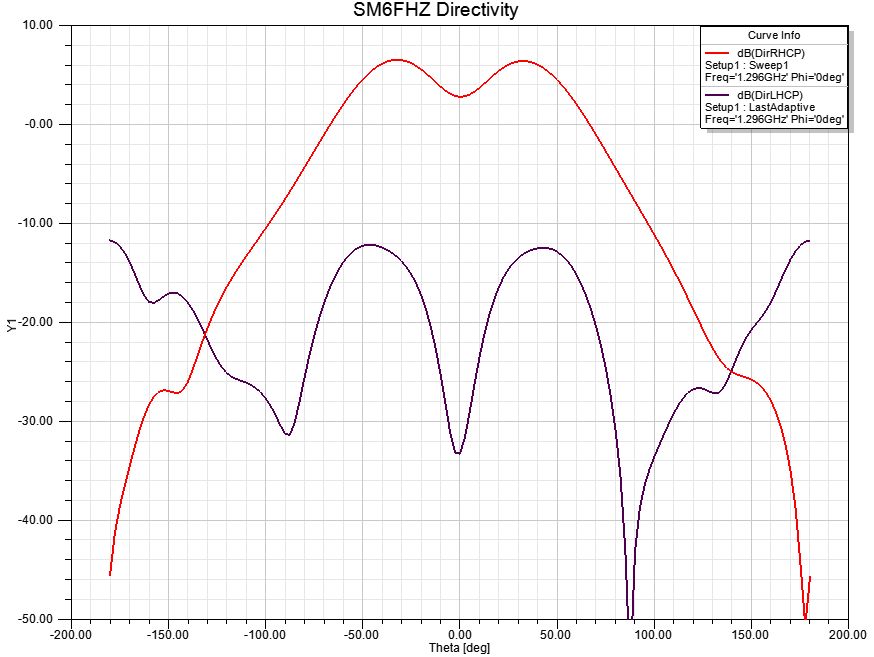 Radiation pattern of the feed. Note the improved polarisation ratio

I next pondered what to do for a power amplifier for 1296MHz. Again, looking at some of the prices being asked for some commercial units, I decided to see if there was anything that I could build that would give me some reasonable power. Eventually I came across some obsolete devices for sale on-line (MRF9060) for not too many dollars. The datasheet claims 950MHz max operating frequency, but as these FETs are not internally matched I felt it worth the gamble to see if I could produce some power at 1296MHz.
And it looks like I'm not covering new ground here: John G4BAO has an excellent article detailing the design of a 23cm amp using the similar MRF9045 (Useful Links). This gave me some confidence (possibly misplaced) to forge ahead.
Of course, I would be using FR4 PCB instead of the nicer (and more expensive) Taconic PCB material. And I have no idea about the '9060 impedances at 1296MHz.
But that's part of the fun, really.
So, some reasonable guesses from the datasheet, and a few minutes with APPCAD and a smithchart (Useful Links) led me to a circuit design as seen below.

Initial testing was not so encouraging. But some time with a scalpel and some copper shim enabled me tune tune the input Return Loss to better than -15dB, and an output power of around 42W (Gain around 13dB). Psat around 50W.
Clearly not as much as I would expect from the device, but given my somewhat slipshod approach, I am not overly displeased with the result.
A box around the PCB and heatsink, together with a fan and bias control circuit complete this amp.

When I get around to it, I'll re-calculate the device impedances based on the amount of copper shim I added to the prototype PCB, and I may even consider another PCB manufacture run.