Some photos of my 144MHz EME (Earth-Moon-Earth) system

After packing up and moving interstate, I have finally got around to re-erecting my old 144MHz moonbouncing station. This time around I have a much bigger backyard and am in a quieter (radio noise wise) environment.

We start with the antenna system. This is the most important part of the system. Without exception.
I am using an array of 4 9-element yagis. It is a loop-fed design (Useful Links) which has an excellent Gain to Temperature ratio (G/T). In a quiet location, any noise reduction due to rear/side lobes is worth striving for. I can hear and decode signals that were not even visible in my former location.It makes an appreciable difference to my weak-signal detection capability.

For anyone interested in modelling the antenna that I built, here's the NEC listing. Bear in mind that I used the NEC4 engine for the simulations.

My approach to feeding the LFA antenna is a simple one: use a decoupling choke on the coax, and leave the folded dipole free to find it's own balance point - don't force the opposite end to ground. Instead, use a quarter-wave section of coax, connected to the feed at one end, shorted to the boom at the other to maintain a DC short and noise immunity. The choke offers close to 500 ohms of impedance at 144MHz, so 2 chokes per yagi is more than good enough to choke off any current on the outer of the coax.

The following results are from a NEC4 free space far field simulation. The model includes tower hardware so we can get an idea of how badly the radiation pattern and rear lobes are skewed by having extra metal within the array. I have purposely understacked the antennas to improve sidelobe levels, at the expense of around 0.8dB of forward gain.

Elevation cut of the array

Azimuth cut of the array

Note the clean rear lobes, even in the presence of the extra tower hardware. This directly helps the G/T ratio and hence the ultimate sensitivity of the system.

The tower is mounted onto a plinth with a hinge and brake winch, which makes antenna maintenance a simple task 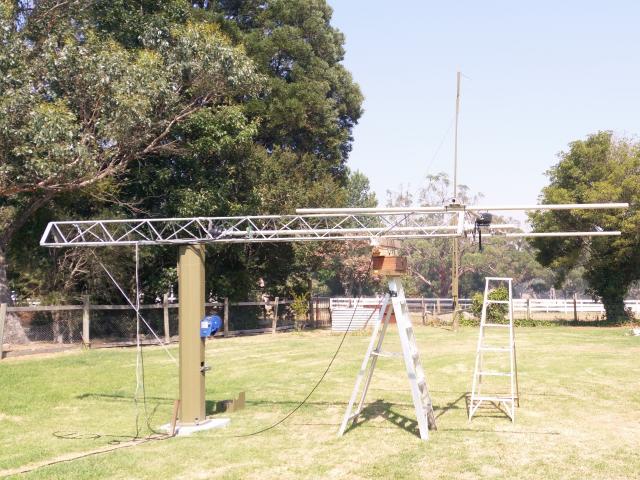 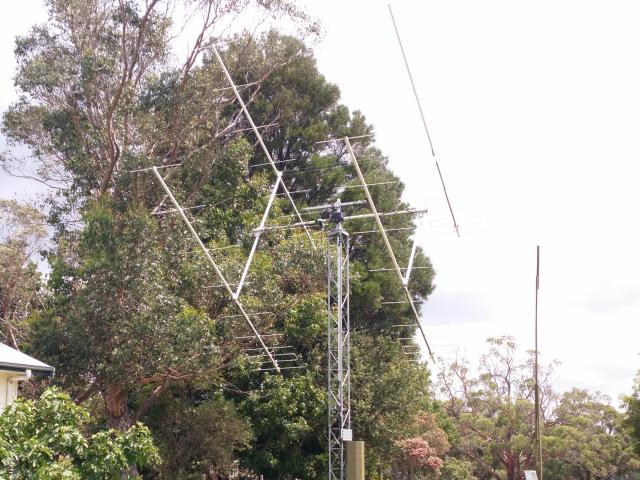 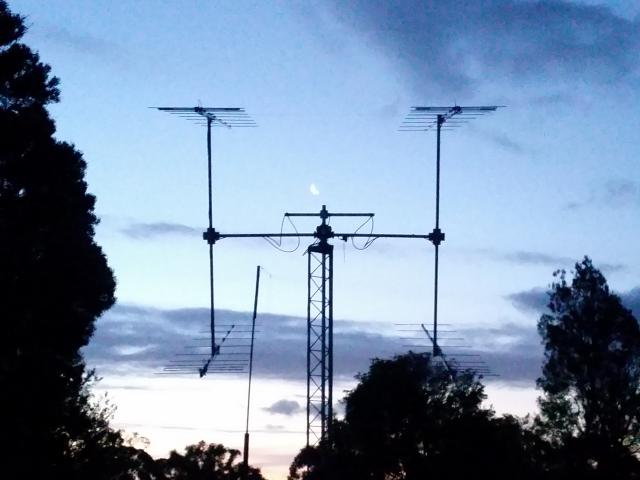 Next up I spent some time to see if I could optimise the receive front-end of my 144MHz system by reducing the system noise figure.
Up till recently I have been using a receive preamplifier based on the old 3SK121 FET - a capable device, but certainly nothing extraordinary in terms of excess noise figure or gain. Moreover, since building a PANFI, the limitations of the 3SK121 have been clearly highlighted.
The 3SK121 device achieved a gain of around 18.5dB, and noise figure of about 0.6 ~ 0.7dB. Given the class of devices available today, a re-design is clearly warranted.
I settled on the ATF-54143 PHEMT device manufactured by Avago. This device seems to be universally used by the EME community for both 144MHz and 432MHz moonbounce, and the specs look quite impressive.
So my design goals were:

The Avago data sheet for the device (Useful Links) covers pretty much all that is necessary to get the device going.
As per the data sheet, I used an active bias scheme to keep the bias point reasonably constant over temperature (I plan to use this preamplifier at the antenna mast). I also added a simple bandpass filter to the output of my LNA design to help mitigate against large signals from FM broadcasters overloading my receiver.
I used an old version of Serenade software to simulate and optimise my design, settled on a circuit and made some prototypes.

Nearly all parts loaded
In a box and ready for testing

I had the chance to perform some measurements of this preamplifier using a HP346B noise diode together with a HP8970A PANFI.
To make the most of the opportunity, I thought I'd try a couple of techniques to investigate noise figure measurement limitations.
Firstly, I wanted to see if a precision attenuator in front of the preamplifier would help reduce impedance variations caused by switching the 346B noise source on and off. Reducing these variations will definitely help reduce measurement uncertainties.
My results are summarised below:

Not a huge difference, but it all adds to the uncertainties.
Please note that the attenuator (being placed before the preamplifier) is not included in the calibration loop; its effect on both indicated gain and noise figure must be calculated and compensated for manually.

Using the HP346B and attenuator combination, I performed a 2 sets of measurements for each preamplifier: the second set with an additional 0.25 wavelength (at 144MHz) length of coaxial cable between the attenuator and preamplifier. Any variation in indicated noise figure between these 2 sets of measurements will indicate a sensitivity to the impedance presented to the preamplifier.
Note that the extra losses induced by this 0.25 wavelength cable (to both the indicated gain and noise figure) must be accounted for.

The table above shows results for 2 preamplifiers. The noise figures in bold represent 2 measurements taken with and without the extra 0.25 wavelength cable. The numbers agree sufficiently well to indicate that the HP346B+attenuator combination provides an adequately constant impedance for the measurement.

I have learned a bit about the trade-offs that go into designing a low noise preamplifier. But I would like to emphasise that sub-1dB noise figure measurements are notoriously difficult to make with any degree of accuracy at the best of times, let alone using the equipment available to me.
I claim nothing other than the plots and tabulated results represent what I measured with the equipment available. Applying my measurement results to Keysite's Noise Figure Uncertainty Calculator (Useful Links), a total noise figure measurement uncertainty is calculated as +-0.208dB.
The major contributors to this uncertainty are the ENR of the HP346B (+-0.2dB) and the measured attenuator accuracy (+-0.05dB). Without access to better calibration, nothing can be done to improve this uncertainty.
This preamplifier will never be "best in class", and is not really meant to be. It's a simple design using easily obtained (read 'cheap') components. With that in mind, it still makes for a very good preamplifier for 144MHz EME.

I am still testing the system but preliminary results indicate that this system is working well, albeit with a bias towards a better receive than transmit capability.